From Wikipedia, the free encyclopedia
For other uses, see Sundarbans (disambiguation).

For the Indian part, see the Sundarbans National Park.

The Sundarbans (Bengali: সুন্দরবন, Shundôrbôn) is a vast forest in the coastal region of the Bay of Bengal which is one of the natural wonders of the world. Located in the delta region of Padma, Meghna and Brahmaputra river basins, this unique forest area extends across Khulna, Satkhira, Bagerhat, Patuakhali and Barguna districts. The Sundarbans is the largest forested forest in the world, as the largest mangrove forest in the coastal environment. Sunderbans, which has a population of 6,017 sq km in[[1] ] 10,000 square kilometers,[2]is in Bangladesh. In 1997, Sundarban was recognized as UNESCO World Heritage Site. The Bangladesh and Indian part of it is in fact an adjacent part of the uninterrupted landmark, but the list of UNESCO World Heritage List has been listed differently; In the name of "Sundarbans" and "Sundarban National Park" respectively. The Sundarbans are trapped in the net, with small streams of marine streams, mud shores and mangrove forests, small-scale archipelago. 31.1 percent of the total forest area, which is 1,874 sq km, consists of riverbed, inlet, bill, and water.[3] Forests, known for its self-contained Royal Bengal Tiger, as well as numerous species of animals, including Chital Deer, Crocodile and Snakes . According to the survey, 500 tigers and 30,000 chitra deer are now in the Sunderban area. On 21 May 1992, Sundarban was recognized as a Ramsar Site.

The name Sundarban can be literally translated as "beautiful forest" in the Bengali language (Shundôr, "beautiful" and bôn, "forest"). The name may have been derived from the Sundari trees (the mangrove species Heritiera fomes) that are found in Sundarbans in large numbers. Alternatively, it has been proposed that the name is a corruption of Samudraban, Shomudrobôn("Sea Forest"), or Chandra-bandhe (name of a primitive tribe). However, the generally accepted view is the one associated with Sundari or Sundri trees.[5]

Village in a clearing of Sundarbans. Drawing by Frederic Peter Layard after an original sketch of 1839

House in Sundarbans with a pond and rice fields, 2010

The history of the area can be traced back to 200–300 AD. A ruin of a city built by Chand Sadagar has been found in the Baghmara Forest Block. During the Mughalperiod, the Mughal Kings leased the forests of the Sundarbans to nearby residents. Many criminals took refuge in the Sundarbans from the advancing armies of Emperor Akbar. Many have been known to be attacked by tigers.[6] Many of the buildings which were built by them later fell to hands of Portuguese pirates, salt smugglers and dacoits in the 17th century. Evidence of the fact can be traced from the ruins at Netidhopani and other places scattered all over Sundarbans.[7] The legal status of the forests underwent a series of changes, including the distinction of being the first mangrove forest in the world to be brought under scientific management. The area was mapped first in Persian, by the Surveyor General as early as 1764 following soon after proprietary rights were obtained from the Mughal Emperor Alamgir II by the British East India Company in 1757. Systematic management of this forest tract started in the 1860s after the establishment of a Forest Department in the Province of Bengal, in British India. The management was entirely designed to extract whatever treasures were available, but labour and lower management mostly were staffed by locals, as the British had no expertise or adaptation experience in mangrove forests.[8]

The first Forest Management Division to have jurisdiction over the Sundarbans was established in 1869. In 1875 a large portion of the mangrove forests was declared as reserved forests under the Forest Act, 1865 (Act VIII of 1865). The remaining portions of the forests were declared a reserve forest the following year and the forest, which was so far administered by the civil administration district, was placed under the control of the Forest Department. A Forest Division, which is the basic forest management and administration unit, was created in 1879 with the headquarters in Khulna, Bangladesh. The first management plan was written for the period 1893–98.[9][10]

In 1911, it was described as a tract of waste country which had never been surveyed nor had the census been extended to it. It then stretched for about 266 kilometres (165 mi) from the mouth of the Hugli to the mouth of the Meghna river and was bordered inland by the three settled districts of the 24 Parganas, Khulna and Bakerganj. The total area (including water) was estimated at 16,900 square kilometres (6,526 sq mi). It was a water-logged jungle, in which tigers and other wild beasts abounded. Attempts at reclamation had not been very successful. The Sundarbans was everywhere intersected by river channels and creeks, some of which afforded water communication throughout the Bengal region both for steamers and for native ships. 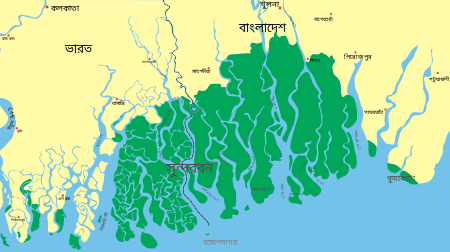 The Sundarbans is intersected by a complex network of tidal waterways, mudflats and small islands of salt-tolerant mangrove forests. The interconnected network of waterways makes almost every corner of the forest accessible by boat. The area is known for the Bengal tiger (Panthera tigris tigris), as well as numerous fauna including species of birds, spotted deer, crocodiles and snakes. The fertile soils of the delta have been subject to intensive human use for centuries, and the ecoregion has been mostly converted to intensive agriculture, with few enclaves of forest remaining. The remaining forests, taken together with the Sundarbans mangroves, are important habitat for the endangered tiger. Additionally, the Sundarbans serves a crucial function as a protective barrier for the millions of inhabitants in and around Khulna and Mongla against the floods that result from the cyclones. The Sundarbans has also been enlisted among the finalists in the New7Wonders of Nature. 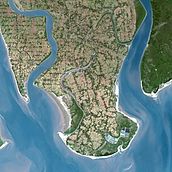 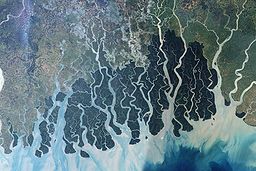 The mangrove-dominated Ganges Delta – the Sundarbans – is a complex ecosystem comprising one of the three largest single tracts of mangrove forests of the world. Situated mostly in Bangladesh, a small portion of it lies in India. The Indian part of the forest is estimated to be about 19 percent, while the Bangladeshi part is 81 percent. To the south the forest meets the Bay of Bengal; to the east it is bordered by the Baleswar River and to the north there is a sharp interface with intensively cultivated land. The natural drainage in the upstream areas, other than the main river channels, is everywhere impeded by extensive embankments and polders. The Sundarbans was originally measured (about 200 years ago) to be of about 16,700 square kilometres (6,400 sq mi). Now it has dwindled into about 1/3 of the original size. The total land area today is 4,143 square kilometres (1,600 sq mi), including exposed sandbars with a total area of 42 square kilometres (16 sq mi); the remaining water area of 1,874 square kilometres (724 sq mi) encompasses rivers, small streams and canals. Rivers in the Sundarbans are meeting places of salt water and freshwater. Thus, it is a region of transition between the freshwater of the rivers originating from the Ganges and the saline water of the Bay of Bengal.[11]

The Sundarbans along the Bay of Bengal has evolved over the millennia through natural deposition of upstream sediments accompanied by intertidal segregation. The physiography is dominated by deltaic formations that include innumerable drainage lines associated with surface and subaqueous levees, splays and tidal flats. There are also marginal marshes above mean tide level, tidal sandbars and islands with their networks of tidal channels, subaqueous distal bars and proto-delta clays and silt sediments. The Sundarbans' floor varies from 0.9 to 2.11 metres (3.0 to 6.9 ft) above sea level.[12]

Biotic factors here play a significant role in physical coastal evolution, and for wildlife a variety of habitats have developed which include beaches, estuaries, permanent and semi-permanent swamps, tidal flats, tidal creeks, coastal dunes, back dunes and levees. The mangrove vegetation itself assists in the formation of new landmass and the intertidal vegetation plays a significant role in swamp morphology. The activities of mangrove fauna in the intertidal mudflats develop micromorphological features that trap and hold sediments to create a substratum for mangrove seeds. The morphology and evolution of the eolian dunes is controlled by an abundance of xerophytic and halophytic plants. Creepers, grasses and sedges stabilise sand dunes and uncompacted sediments. The Sunderbans mudflats (Banerjee, 1998) are found at the estuary and on the deltaic islands where low velocity of river and tidal current occurs. The flats are exposed in low tides and submerged in high tides, thus being changed morphologically even in one tidal cycle. The tides are so large that approximately one third of the land disappears and reappears every day.[13] The interior parts of the mudflats serve as a perfect home for mangroves.

The Sundarbans freshwater swamp forests are a tropical moist broadleaf forest ecoregion of Bangladesh. It represents the brackish swamp forests that lie behind the Sundarbans Mangroves, where the salinity is more pronounced. The freshwater ecoregion is an area where the water is only slightly brackish and becomes quite fresh during the rainy season, when the freshwater plumes from the Ganges and the Brahmaputra rivers push the intruding salt water out and bring a deposit of silt. It covers 14,600 square kilometres (5,600 sq mi) of the vast Ganges-Brahmaputra Delta, extending from the northern part of Khulna District and finishing at the mouth of the Bay of Bengal with scattered portions extending into India's West Bengal state. The Sundarbans freshwater swamp forests lie between the upland Lower Gangetic plains moist deciduous forests and the brackish-water Sundarbans mangroves bordering the Bay of Bengal.[15]

A victim of large-scale clearing and settlement to support one of the densest human populations in Asia, this ecoregion is under a great threat of extinction. Hundreds of years of habitation and exploitation have exacted a heavy toll on this ecoregion's habitat and biodiversity. There are two protected areas – Narendrapur (110 km2) and Ata Danga Baor (20 km2) that cover a mere 130 km2 of the ecoregion. Habitat loss in this ecoregion is so extensive, and the remaining habitat is so fragmented, that it is difficult to ascertain the composition of the original vegetation of this ecoregion. According to Champion and Seth (1968), the freshwater swamp forests are characterised by Heritiera minor, Xylocarpus molluccensis, Bruguiera conjugata, Sonneratia apetala, Avicennia officinalis, and Sonneratia caseolaris, with Pandanus tectorius, Hibiscus tiliaceus, and Nipa fruticans along the fringing banks.[15]

The Sundarbans Mangroves ecoregion on the coast forms the seaward fringe of the delta and is the world's largest mangrove ecosystem, with 20,400 square kilometres (7,900 sq mi) of area covered. The dominant mangrove species Heritiera fomes is locally known as sundri or sundari. Mangrove forests are not home to a great variety of plants. They have a thick canopy, and the undergrowth is mostly seedlings of the mangrove trees. Besides the sundari, other species that make up the forest include Avicennia spp., Xylocarpus mekongensis, Xylocarpus granatum, Sonneratia apetala, Bruguiera gymnorrhiza, Ceriops decandra, Aegiceras corniculatum, Rhizophora mucronata, and Nypa fruticanspalms.[16]

Twenty-six of the fifty broad mangrove types found in the world grow well in the Sundarbans. The commonly identifiable vegetation that grow in the dense mangrove forests at the Sundarbans are salt water mixed forest, mangrove scrub, brackish water mixed forest, littoral forest, wet forest and wet alluvial grass forests. The Bangladesh mangrove vegetation of the Sundarbans differs greatly from other non-deltaic coastal mangrove forests and upland forests associations. Unlike the former, the Rhizophoraceae are of minor importance.

Ecological succession is generally defined as the successive occupation of a site by different plant communities.